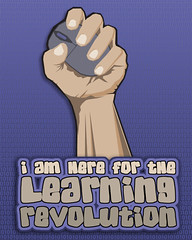 This post (aka rant) is a result of being part of a team driving change at my school; studying not one, but two university subjects focusing on leadership; and having numerous conversations about leadership in recent times beyond these circumstances.

There’s a fine balance between the autocratic/transactional style of one-way communicating telling staff how things are to be done and a constant consultative style that becomes caught in trying to please everyone so that nothing ends up being done.  It isn’t a dichotomy but a spectrum of leadership style.  As a leader I like to work alongside people but realise there are times strong decision making and even discipline may be required (although I know to treat the action not the person, just like with students).

Character traits apply to leadership style but a lot of the traits demonstrated by leaders are an act, not necessarily something they are given at birth.  I’m naturally an introvert but assume a stronger persona because I’m someone who strives to be a high achiever (if a job needs to be done I want to do it well). This is why most people view me as an extrovert.  For instance, I hate conflict as a passive observer but being in it or trying to reconcile conflict between others is worse.  Yet, I am good at it.  I once went to a psychologist who helped in career matters and he told me that my sense of pride in doing things well over-rode being out of my comfort zone but it wasn’t sustainable as a constant practice.  At uni we were once asked what we thought was the most important aspect of leading change, and everyone else said communication while I said, all-in.  Communication is just a method for driving an all-in attitude.  I therefore work on solidarity, cohesion and an all-in attitude within teams.

I believe there should be a clear vision in schools and that a vision should have at its core a focus on learning, but too often I see schools avoiding the word learning and making the vision more about character.  I wonder how much this is to absolve parents from that role?  I think developing character is important but learning across all aspects of life is important and surely, the main purpose of secondary education.

I think it is important for my current school to move from a transactional leadership paradigm to a transformational paradigm (Bass 1997) but beyond this, it needs to bring in more open leadership style, with a focus on people more than administration (Kotter 1990).  I want to be part of that paradigm shift.  I like what Robinson, Lloyd and Rowe (2008) and Davies and Davies (2005) have to say about leadership because although they simplify leadership, they don’t oversimplify it into unrealistic expectations of a mere series of steps to follow. For instance, I like Robinson et al emphasise building trust and it appears genuine, not just a means for meeting goals.  Davies & Davies are excellent at moving leadership theory for product based organisations to the school environment and taking context of environment into account.

I love Eacott’s (2011) analysis of Bourdieu (who I studied extensively as part of a writing and literature course) partly because “A central aim of Bourdieu’s sociology is the attempt to remove the dichotomy between the individual and society” and partly because Eacott demonstrates how the accountability of schools have become the end-goals in themselves (p.42).  The HSC should be a measurement, not the goal in itself.  The learning involved in undertaking the HSC should be the goal.

We need a focus on learning in an environment of trust and strong relationships.  Otherwise, schools become a competitive arena about point scoring, amongst staff and amongst students.  Even between teachers and students.  Some of the top academic achieving schools seem to want to foster an individual selfish competitive environment, taking away the focus on learning to a focus on marks, and even though I’m competitive by nature and take pride in high marks (mine and my students’), a system that thrives on that is my idea of hell.

NY8: The Last Day
Everything old is new again