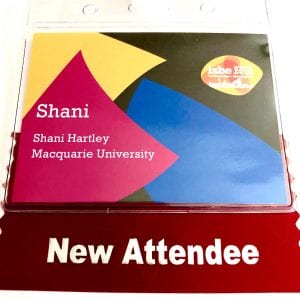 My first communication outside the Twitterverse with Dr Colin Jones was an hour long phone conversation back in March or April about my MRES topic. When I mentioned I was presenting on Enterprise Education (EE) in Cologne, he suggested I also attend the ISBE conference in Birmingham the following week, since I was in the area. At the conference, Colin introduced me to his friends/contacts which led to many interesting conversations. We also had time to continue our discussions about EE and my possible research focus, which were extremely valuable and enjoyable.

Anyway, here’s A PIECE of what I appreciated most from the conference.

I enjoyed the idea Dr David Higgins presented about the need for EE to be researched as an activity (verb) and our own involvement, as opposed to the clinical scientific arms-length approach that describes human activity in concrete terms (nouns) instead of their actions/emotions/motivations/thinking/etc .

People I knew via Twitter came to life at the conference:

Dr Kelly Smith – I love how passionate she is about EE  and she introduced me to the term Pracademic.

Andrea Lane – a knowledgable and thoughtful person who makes me think deeper.

Matt Rogers-Draycott – Matt first came to my attention just a few months ago when I read an older article he co-authored. I did a series of tweets about it because I just love his thinking and approach to EE.

Catherine Brentnall – I had a few but brief chats with Catherine at the conference. She didn’t have much luck while she was there. For instance, a taxi driver took her to McDonalds for the Gala Dinner instead of the Macdonald Burlington Hotel and she had a tummy bug on the last day resulting in her having to leave as soon as she presented her paper. However, I’m sure this friendship will continue to grow over Twitter.

Prof Nigel Adams – In discussion on the walk to and during the gala dinner, Nigel reminded me of ‘Doc’ in Back to the Future due to his intelligence, passion and eccentric mannerisms. He even showed me video of him riding an electronic skateboard owned by one of his students.

Will Hogan and Peter Harrington of SimVenture – I met these two at the gala dinner. We then continued talking to after midnight at the hotel bar.

Unfortunately I missed Lucy Hatt’s presentation, mainly because it wasn’t in the Enterprise Education stream. We follow each other on Twitter and had chatted briefly at the conference. At lunch on the second day, Lucy and Colin talked intensely and deeply about her concept of intersections in the student’s entrepreneurial journey, while I listened in. Colin was adding to it by saying the role of the teacher is to be at some of those intersections and work out what the student needs to help the student choose the path from that point. I also recommend following Lucy’s excellent reflection blog about her PhD process and progress.

During one of breaks, Andrea and I talked about a range of EE topics, including the echo chamber of EE, particularly that it often echoes theoretical papers more than empirical research. Lo and behold, the very next talk by Catherine and David was about the need to break out of the echo chamber and include more philosophy in the EE field.

I have been considering some sort of organisational theory/ies for my PhD. I was reminded by Dr Su-Hyun Berg and Prof Jay Mitra’s presentation of an ecosystem approach. I’m a little wary though, because sometimes ecosystem is a bit of a buzzword in EE literature. On the last night Su-Hyun, Jay, Colin and I went for a drink. Jay and Colin regaled us with conference stories and I learned how Su-Hyun moved from Korea to Germany 14 years ago and after two years of resisting the German language, gave in and now speaks it fluently.

This is just A PIECE of what the two days of conference gave me. Now, as I enter the solo holiday part of my trip, I need to write my PhD EOI/proposal which has been informed and confused by the ever-increasing number of EE concepts that have been brought to my attention.