WHAT IF? Embracing complexity through curriculum innovation 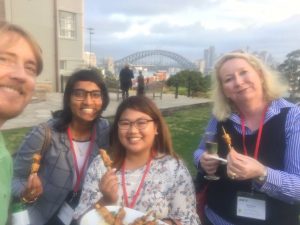 Drinks at the end of Day 1

Curriculum is an excuse for getting together.

Dr Timothy Wright, Principal of Shore, nailed it with this remark. He assured us it wasn’t a flippant statement but said with depth of meaning. It was actually a profound and prophetic statement.

Despite not being involved with the creation of the Melbourne Declaration of Educational Goals (2009), teachers, for the most part, agree with its goals (p.8):

It goes on to say:

Achieving these educational goals is the collective responsibility of governments, school sectors and individual schools as well as parents and carers, young Australians, families, other education and training providers, business and the broader community. (p.8)

What if we set and implemented curriculum that actually aligned with these educational goals? What would education in our schools be like then?

The Creation of Curriculum

The curriculum is not just the set of documents that come out of the Australian Curriculum, the state equivalents and their supporting bodies. It is the political and social context behind it. It is the school culture, the people within those schools and the community within which they function. It is influenced and developed by all involved but, of course, with some having stronger voices than others.

The Australian Curriculum provides a broad scope of what education should involve in a three dimensional structure:

However, the curriculum mostly espoused by those in authority focuses on the areas of literacy, numeracy and knowledge within learning areas. They overemphasise content at the expense of deeper learning, critical thinking, enterprise and social skills and the other general capabilities in the diagram above. Our testing system (PISA, TIMSS, NAPLAN, and Year 12 final exams) generally align with this narrow view of curriculum. The curriculum in practice is then designed with these measurements in mind, when instead we should be designing measurements (assessments) within this broader curriculum. As a result, some of the vital areas necessary for students in the world we live in today and into the future are neglected. Prof Alan Reid suggested a richer and more comprehensive assessment system is required, perhaps against the general capabilities through achievement standards in the Australian Curriculum.

With our educational authorities and their cheer-squad media continually pushing for excellence in the areas so publicly measured, the equity aspect of Goal 1 (Australian schooling promotes equity and excellence) falls by the wayside. This lack of equity in our schooling was presented by Dan Haesler, supported by the research as listed on his website.

Australia’s overall level of schools’ educational resources is above the OECD average… yet it is ranked fifth among 36 participating countries in resource disparity between advantaged and disadvantaged schools. (Connors & McMorrow, 2015, p.55)

These statistics seem far removed from the government’s commitment in the Melbourne Declaration that it was committed to act upon improving educational outcomes for Indigenous youth and disadvantaged young Australians, especially those from low socioeconomic backgrounds (p.11).

Robert Randall, CEO of ACARA, responded to what Alan Reid and Dan Haesler had to say. He agreed that we needed to improve our assessment measures and generally stayed on safe ground. What annoyed me though, was his repeated references to education being a passport. This is like saying school education merely acts as a gateway to the rest of your life and is not important in itself. It places the emphasis on the final score at the end of school life instead of all the learning that occurred during that time.

Surely, learning is the point of education.